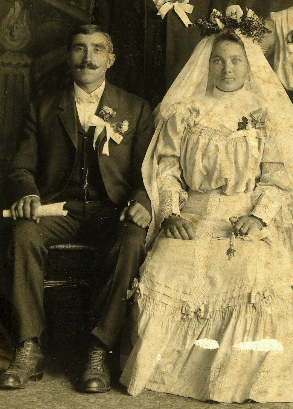 The wedding photo of Paula and Eva Hudec Sklba

Paul Sklba was born 1 November 1882, in Czechoslovakia and came to the United States on 27 February 1905. He married Eva Hudec in Petoskey, Michigan on 23 May 1905. Paul and Eva moved to Lakefield Township in 1912 and purchased an 80 acre farm in Section 15 on the SE corner of Merrill and Lakefield Roads.

Paul and Eva had the following children:

The following information was written by Paul Sklba's son, John Sklba, and was found in the book “Lest we Forget” written by Myron Gulick:

"Paul loved his horses. One team weighed perhaps a ton (2,000 pounds) each. A special harness was made for this team as they could break the trace (tug) on an average harness. He had to haul a load of coal in from the road with his team that three regular teams could not pull. He broke his harness doing it, but that did not stop Paul or dampen his spirits. Omer Parker owned the store where coal was being delivered; the coal was stored in an old chicken coop. Paul and his wife became citizens of the United States of America in about 1942. Paul served as Constable in 1943, 1947, 1949, and 1951. Paul knew what hard work meant. He worked in the sugar beets, and perhaps his wife, Eva, did also. Paul worked in an iron foundry and farmed in some other counties in Michigan before coming to Lakefield Township. The property he owned in Lakefield Township had the Lakefield Township Hall located on the southeast corner of his land, consisting of about one acre. It was almost as long as the acre lot. A small hay shed was built on the west end of this shed. The loose hay was for horses that might have to be left there all day; most likely the teams of the township officers were fed there while the men worked in the township hall. Many men worked on the roads. We had a road tax, and anyone could work out the road tax instead of paying it, as allowed $1.50 per for ten hours of work. Or $3.00 for a man and his team per days. As wage scale rose, wages were upgraded with the times. Paul was a stockholder in a company, and owned a threshing machine that was powered by an oil pull tractor. They owned a grain separator and a bean thresher. This was in the late teens and early 1920's. There must have been days when Paul didn't care to get out and work, but I never head of them. Paul Sklba was a big man with a big heart. Thank you, Paul"

Paul was a member of Sacred Heart Catholic Church in Merrill, Michigan. He belong to the I.K.S.J. Slovak Union. Paul died 27 August 1973 in Grand Blanc, Genessee County, Michigan. Eva died on 8 March 1967. They are both buried in the St. Andrew's Cemetery, Saginaw, Saginaw County, Michigan.