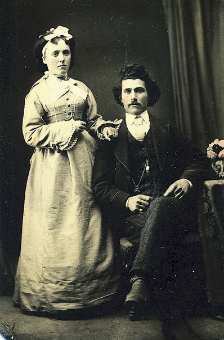 Joseph William Webb was born August 29, 1852 in the Township of Stephen, Huron County, Province of Ontario, Canada; to George and Frances Webb. George and Frances were from Ireland and came to Canada on a sailing ship; they had 13 children, Joseph being one of the older children. Joseph married Margaret Helen Beird on February 18, 1874 in Stephen Township, Ontario; witnesses were David Beird and Heziah Webb. Margaret was born on January 19, 1854 to David and Margaret Owen Beird. 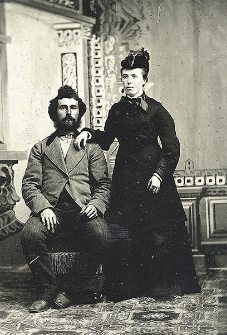 The photos are of Joseph and Margaret Webb

Joseph and Margaret had the following children:

Joseph and Margaret came to the United States in 1875. They lived in Bangor, Van Buren County, Michigan for awhile, moving to Mancelona, Antrim County, Michigan for a short time, then coming to Lakefield Township. By 1896, Joseph and Margaret owned and operated a forty acre farm in Section 24 on the SE corner of Lakefield and Chapin Roads. Their neighbors were: Robert Beird, John Beird, Thomas Beird, James LaLonde,  Frank Levi, H.P. Smith and William House.

Joseph died on September 8, 1930 and Margaret on November 14, 1931. They are both buried in Lakefield Township Cemetery.