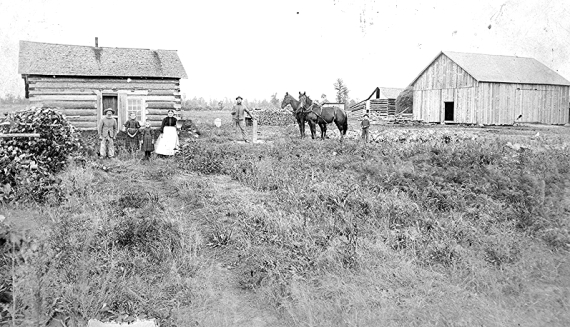 The photo is of Charles Eggebrecht's log cabin and his farm in LakefieldTownship during the 1890's. Pictured in the photo is Charles, Christena, Minnie, William, Ella and Joachim Eggebrecht. 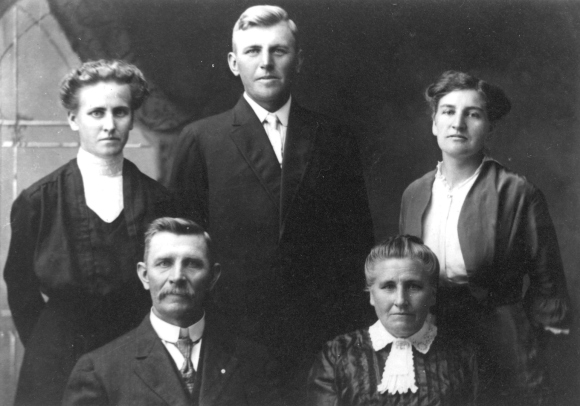 Charles and Christena had the following children:

Charles' father, Joachim was 66 or 67 years old when he came to the United States. He and his wife Maria, lived with their daughter and son-in-law, Carl and Caroline Wittenburg in Saginaw, Michigan. On May 15, 1893, Maria died of Cancer at the age of 63 years old and is buried in the Oakwood Cemetery in Saginaw, Michigan. Joachim lived with Charles and Christena when they moved to Lakefield Township. Joachim died January 14, 1901 at the age of 82 years old of Dropsy, and is buried in the Lakefield Cemetery.

Charles had two sisters, Caroline who was married to Carl Wittenburg; and his sister, Wilhelmina who was married to Edmond Lux.  In 1896, they all lived in Lakefield Township. According to the Lakefield Township Plat Map of 1896, Charles and Christina owned and operated a 35.21 acre farm on the NW corner of Section 16 at the intersection of Roosevelt and Meridian Roads. Their neighbors were: Jacob Lauer, Albert Easlick, S. Wells, Peter Meyer, John Shay, George Trudgeon, John Baker, Louis Baker, Tom Gulick and James Clark. By January 1900,  they owned 40 acres in Lakefield Township in Section 16. 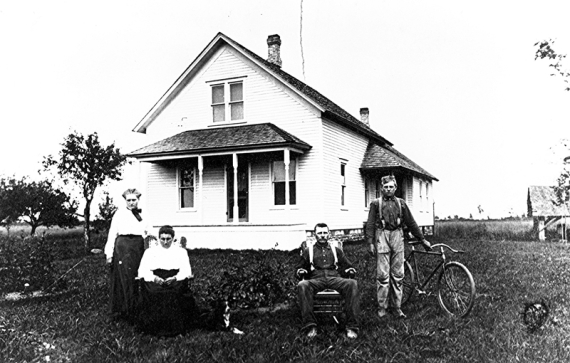 The photo is of Charles and Christena Eggebrecht with their children, William and Ella

Charles' occupation was a carpenter and he built a home for his family at 325 Parsons St., Merrill, Michigan by 1915. By 1920, they moved to Breckenridge, Gratiot County, Michigan.