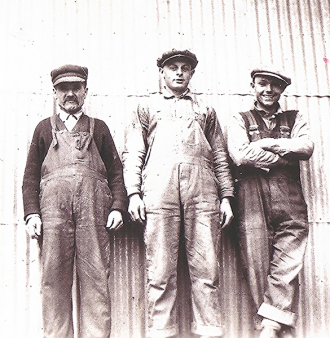 The photo is from L to R: Fred Gotts, Byron Rigg and Frank Nothelther. The photo was taken around 1920 at the Merrill Elevator in Merrill, Michigan.

Fred and Isabell's children were:

Fred owned and operated a 38 acre farm. The farm was in Section 9 of Lakefield Township on the eastside of Meridian Road between Swan Creek and Roosevelt Roads. Fred and Isabelle's children went to the Byrnes Schools which was located on the NE corner of Swan Creek and Fenmore Roads.

Isabell died on August 19, 1943 and Fredrick died on February 23, 1954. They are both buried in the Lakefield Township Cemetery.