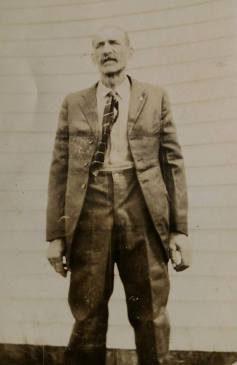 The photo is John Honaman

John and Lettie had the following children:

The book "Lest We Forget" written by Myron F. Gulick, states that John was a fur buyer and also bought scrap metals.

In 1916, John owned and operated a 40 acre farm in Section 34 on Fenmore Road between Grabowski and Colvin Roads in Lakefield Township. His property was north of the 80 acres that his father, Frederick Honaman, owned in the late 1890's and  early 1900's.

John died on 25 November 1928 at the age of 65 years, 5 months and 2 days old. He is buried in the Lakefield Township Cemetery.