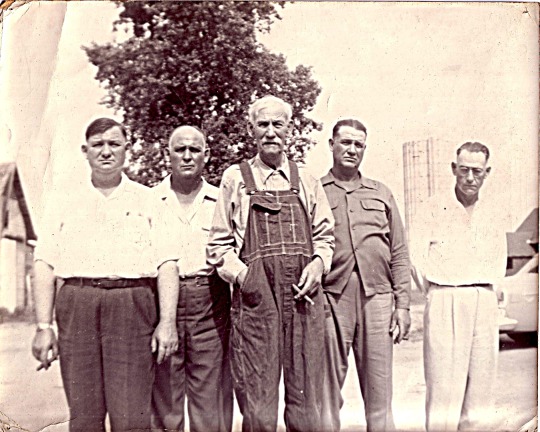 Charles with his sons, Elmer, Dale, Horace and Ivan Brown

Charles moved to Lakefield Township in 1879/1880  Lakefield Township and lived their most of his life. Charles and Lenora moved on a farm in Section 33 on the south side of the road in the middle of the mile between Fenmore and Meridian Roads.

Charles and Lenora's children were:

1.  Charles “Elmer” Brown was born October 9, 1903 in Jonesfield Township, Saginaw County, Michigan. The following information was found in the book “Lest We Forget” written by Myron F. Gulick: “Elmer Brown was Charlie's oldest son. He worked at home for his father. Farming was profitable back then; they grew beets and corn. Elmer drove a Fordson tractor most of the time. It was a hot tractor to ride because the driver's seat was positioned over the transmission where all the gears were, and the oil got very hot. Plowing and discing was done with the tractor; cultivating was done with horses.” “Elmer traveled all over Michigan with the Merrill band. The leader of the Merrill Band was Howard Barber, who spent time in World War I leading an Army band. Howard owned the jewelry store in Merrill, and was among the leading citizens of that community who helped Merrill grow and prosper. Elmer looked nice in his band uniform. ”   He married Gladys Hodges in June, 1926.He married Gladys Hodges in June 1926.

2.  Dale W. Brown was born April 25, 1908.  The following information was found in the book “Lest We Forget”, written by Myron F. Gulick: “Dale also played in the Merrill Band. He worked at home for some years and then married a girl from Saginaw. They moved to Lake City to live.”

3.Horace Franklin Brown was born February 4, 1910 in Jonesfield Township, Saginaw County, Michigan. He married Eva M. Frost on February 27, 1934.  The following information was found in the book “Lest We Forget”, written by Myron F. Gulick: “Horace lived on the old Jake Brown homestead. He farmed and worked in the shop in Saginaw. Many stories surround that farm. Horace married Eva Frost and they had a large family. The house stood on a hill overlooking the Bad River.'' “Plenty of flood wood piled up on the Brown farm, and there was good bass fishing around the logs left by the flood waters. There were lots of riffles in the shallow waters. Here, sucker spearing in the spring was best. There were lots of stones in the stream so boating was not too good. Sliding downhill in the winter was a pasatime for kids from all over our neighborhood.”  Horace died on August 26, 1989 and is buried in the Lakefield Township Cemetery.

Charles died on November 28, 1960 and Lenora died on December 18, 1942.  They are both buried in the Lakefield Township Cemetery.