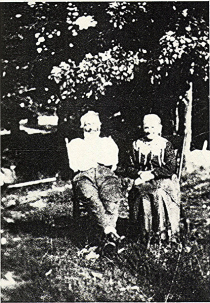 The photo is of Walter and Ellen Cooper

Walter and Ellen's children were:

In 1870, Walter and his brother, Albert, are living in Thomas Township, Saginaw County, Michigan and they are both lumberman. In 1880, Walter was living with his wife, Ellen, daughter Sarah and his two brothers, Thomas and John Cooper in Lakefield Township.

In 1880, Walter owned 5 acres of tilled land and 115 acres of forest or woodland.. In 1896, Walter owned 40 acres of land in Section 12 on Merrill Road between Chapin and Steel Roads. His neighbor was his brother, Albert Cooper.

2.  appointed to Building Committee for Township Hall on April 13, 1895

Walter and Ellen sold their property in Lakefield Township and moved to Gaylord, Livingston Township, Otsego County, Michigan by 1910.