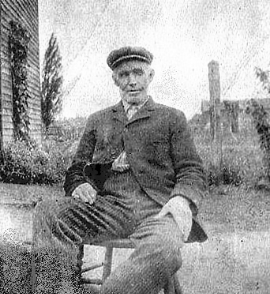 Kenneth T. McInnis was born in January 1840 in Scotland to Neil and Catherine “Kitty” Murdock McInnis.

In 1851, Kenneth lived with his parents, Neil and Catherine, his siblings, Finlay and John McInnis in the Township of Williams, Middlesex County, Ontario, Canada.

In 1871, Kenneth is living with his widowed mother Catherine McInnis, in the Township of Williams, North Middlesex County, Ontario, Canada.

In 1881, Kenneth came to the United States through Pennsylvania.

In 1896, Kenneth is living in Lakefield Township on a 20 acre farm in Section 36 on the North side of Colvin Road between Chapin and Steele Roads. His neighbors were: his brother, Murdock McInnis, Andrew Kenxing, Rodrick McPhee, Hugh McDonald and Kinneth McLeod.