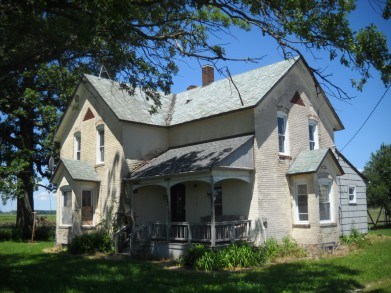 This is the home that James Clark built in the 1890's on Lakefield Road in Lakefield Township.  James worked in Saginaw during the week and brought back to Lakefield the supplies to build his home during the weekend.  While building his home the family lived in a log cabin located on the property.  It was also said that on Lakefield Road between Merrill and Meredian Roads just east of this house was a curve that was hard to drive on with a horse driven sleigh.

James G. and Jenny had the following children:

In 1896, James and Jenny owned and operated 70 acres of land in Section 16 on the corner of Meridian and Lakefield Roads. Their neighbor was Jenny's brother, William Bierd.

By 1916, James had passed away and Jenny owned 28.71 acres in Section 16 on the corner of Meridian and Lakefield Roads. James and Jenny's son, Archie Clark, owned 41 acres adjoining Jenny's 28.71 acres.

James died on March 12, 1910 and Jenny passed away in June 24, 1935. They are both buried in the Lakefield Township Cemetery. Their tombstones read Father and Mother.