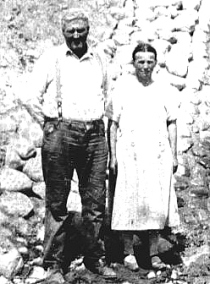 George Henry Harris was born on May 17, 1877 in Lafayette Township, Gratiot County, Michigan to John and Polina Ingraham Harris. He married Flora Waldvogal on December 25, 1902 in Lakefield Township by Justice Joseph Webb. Flora was born May 12, 1884 in Toledo, Ohio to Jacob and Elizabeth Beamer Waldvogal. 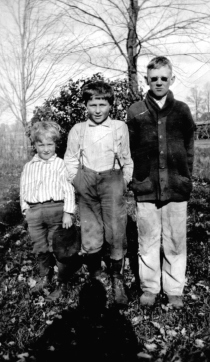 George and Flora had the following children:

George purchased a 40 acre farm in Section 24 on the Southwest corner of Steel and Lakefield Roads. George was a farmer his entire life, but for two years he worked in the lumber camps of Mancelona and L'Anse, Michigan. George was also elected as Lakefield Township Highway Overseer in 1926 and 1928. The job consisted of grading the township roads with a team of horses. He also had a gravel pit and his gravel was used when the township restructured its' roads. He was also elected as Lakefield Township Constable in 1935. George registered to vote on April 4, 1903 and Flora was one of the first ladies in Lakefield Township to register to vote on March 27, 1920. Flora also belonged to the Lakefield Ladies Society.