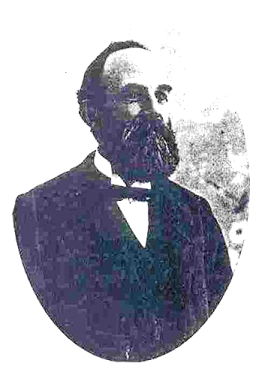 F.H. and Marie had the following children:

F.H. owned and operated 117 acres in Section 4 on Meridian Road between Ederer and Swan Creek Roads in Lakefield Township.

According to the book “Looking Backward” History of Merrill and Jonesfield Township, Saginaw County, Michigan written by W.G. Shannon on pages 11 and 12 states the following: In 1883 an Englishman named Frederick Hobson Stevens, landed in Merrill with his family. After looking around the town he purchased forty acres, that would later become the Zazo farm, for the purpose of raising flowers and vegetables. Mr. Stevens was the father of the Stevens family known for moving whole households in a matter of hours. He was a real gardener. Too bad he was born thirty years to soon. About 1894, the elder Stevens bought the lot next to the Starkweather Building, where he opened floral and “garden sass” shop. He did fairly well for awhile, but he eventually accepted that Merrill was to small to support such a venture. Stevens closed the store and moved to Saginaw where he purchased forty acres along what is now Superior Street. He opened another plant breeding store and eventually developed a BLACK tulip? Stevens was apparently offered quite a sum and sold the rights to the colored flower.”

F.H. died on 9 December 1930 and Marie died 23 November 1941. They are both buried in the Forest Lawn Cemetery, Saginaw, Michigan.