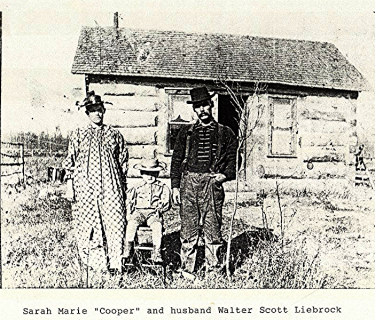 Walter “Scott” Liebrock was born March 5, 1876 in Essex, Ontario, Canada. His parents were Lewis and Elizabeth Ledo/Levi Liebrock. He came from Mersea, Essex District, Ontario in 1889/1890. He married Sarah “Sadie” Maria Cooper on November 12, 1895 in Merrill, Saginaw County, Michigan by Justice of the Peace, E.H. Hillyer. Sadie was born January 5, 1879 in Lakefield Township. Her parents were Walter and Ellen J. Helson Cooper.

Scott and Sadie had the following children:

In 1896, Scott and Sadie owned and operated a 40 acre farm in Section 13 on the north side of Lakefield Road between Chapin and Steel Roads in Lakefield Township. Their neighbors were William House, Walter Wilson, Jonathan Edwards, James LaLonde, John Beird, Joseph Webb, Lewis Liebrock and Henry Liebrock.

Sarah “Sadie” Liebrock registered to vote on March 22, 1919 and was one of the first woman in the township to register. After the women's suffrage movement, early in 1918, a bill granting limited franchise to women was passed. Women over the age of 30 years old, and those over 21 years old, who were married to householders were given the right to vote.

Scott died on January 19, 1932 and Sadie died on December 13, 1956. They are both buried in the Lakefield Township Cemetery.