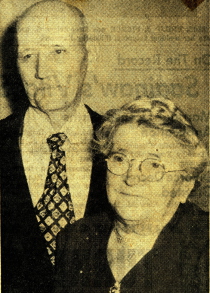 Herman Hinterman was born January 13, 1875 in Lafayette Township, Gratiot County; his parents were Rudolph and Emma Wend/Weand Hinterman. Herman married Sarah J. Webb on November 17, 1897 in Fitchburg, Mason, Ingham County, Michigan. Sarah was born on October 13, 1877 in Grand Bend, Ontario, Canada and came to Lakefield Township when she was nine years old with her parents Joseph and Mary Jane Baird/Beird Webb. Herman and Sarah had lived in Lakefield Township their entire married life.

Herman and Sarah had the following children:

Herman and Sarah owned an 80 acre farm in Section 26 on Chapin Road between Nelson and Grabowski Roads. Their children attended the Nohel School District on the corner Chapin and Grabowski Roads. Sarah was a member of the Lakefield Ladies Society and both, Herman and Sarah, belonged to the Lafayette Presbyterian Church, Ithaca, Gratiot County, Michigan. Sarah was one of the first ladies in Lakefield Township to register to vote on March 29, 1919, after the women's suffrage movement.

Herman passed away on November 30, 1961 and Sarah on October 13, 1977. They are both buried in the Lakefield Township Cemetery.