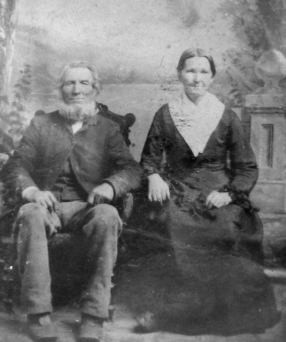 Colin/Collin McDonald was born 1821 in Scotland. He went to Canada in 1848 and came to Michigan in 1873. Colin married Isabella Grant. She was born on October 4, 1832 in New Brunswick, Nova Scotia, Canada. Isabella's parents were Angus and Gen Cameron Grant.

Colin and Isabella had the following children:

In 1880, Colin and his family are living in Lakefield Township and according to the 1880 Agriculture Census it states the following about Colin: He owns 25 acres of tilled land, 5 acres of meadow land, 47 acres of woodland. He owns 2 working oxen; 6 cows and 2 calves. He also grows 2 acres of buck wheat, 3 acres of Indian Corn and 1 acre of potatoes.

By 1896, Colin and Isabella owned and operated 40 acres of land on the corner of Meridian and Ederer Roads in Section 4 of Lakefield Township. Colin's son, Angus, owns and operates his other 40 acres. Their neighbors were Angus McDonald, Martin Suber/Zuber, F.H. Stevens, Eli Eastman, and Patrick O'Connor.