James married Margaret “Maggie” Kissane on November 20, 1894 in Merrill, Saginaw County, Michigan.  Maggie was born on March 17, 1871 in Tarbert Not, Kerry, Ireland. Her parents were John and Mary Mahoney Kissane. Maggie came to the United States in 1873 with her parents and siblings. 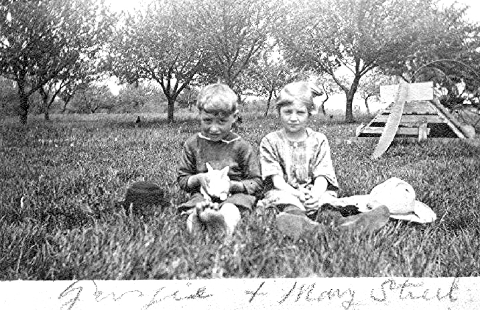 The photo is of Mary Street (right) the youngest daughter, of James and Maggie, with their neighbor George Rigg's grandson, Georgie Pierson. Photo taken around 1915 in Lakefield Township.

James and Maggie's children were:

The photo is Oliver Street,  picture was taken in 1912 at the Parker School 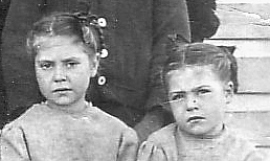 The picture is of Agnes (left) and Mildred (right) Street, picture taken in 1912 at the Parker School.

Maggie died on March 22, 1938 and James died on September 6, 1945. They are both buried in the St. Andrews Cemetery in Saginaw, Michigan.