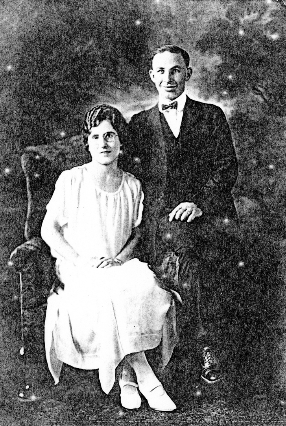 Henry and Clara had one daughter:

In the book “Lest We Forget” written by Myron F. Gulick, states the following of Henry Wenzel's store (Wenzel Grocery, Gas & Oil) and baseball field (Wenzel Park): “After Henry bought the store, he had gasoline pumps installed. These were called hand pumps; the long handle at the base was stroked to pump the gasoline up into a glass container at the top of the pump, which had the number of gallons marked on the side, to the limit of ten gallons. Gravity flow through a rubber hose from the glass container transferred the fuel to the car. This was done by opening the shut-off valve in the hose. Letting the gasoline flow into the car's tank took only a half minute or so, but pumping the gasoline up into the glass bow might take three or four minutes.

The store was built in Lakefield Township and later moved to Lafayette Township, Section 24, Northeast corner. Mr. Charley Anschutz moved it there, where it stood for many years. Progress was made in the store's operation by Henry's persistent efforts. Folks depended on him to have almost everything they needed for sale. Groceries, bolts, nails, tobacco, gasoline, oils, grease, gloves, shirts, overalls, jackets, hardware, pop, ice cream, cigars, cigarettes – you name it, they had it. In later years, large supplies of gasoline were stored in a very large tank for supplying farm tractors. Henry also had a bulk fuel delivery tank truck with a large route of customers. Stove fuel was delivered in cold weather; this was a cold, tiring job, and the roads were not always in the best condition.

With all of this work, Henry still had a ball diamond (Wenzel Park), equipped with several large lights for night playing. The baseball players were local boys and girls for the home team; they (Henry and Clara) spent many hours keeping the ball field ready for games. The seats had to be kept clean and mosquitoes had to be controlled. No one would pay to see a ball game and sit there to be bitten by mosquitoes. Rain was also a problem; games sometimes had to be called off by rain. This is history now.”

Henry and Clara were married 63 years. Henry died on 10 June 1987 and Clara on 11 September 1996. They are both buried in the Lafayette Township Cemetery, Wheeler, Gratiot County, Michigan.