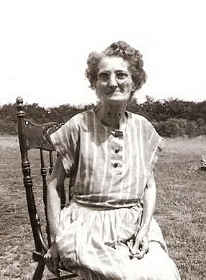 The photo is of Ellen Deal Tolfree

Joseph and Ellen's children were:

On the 1890 Badgero Drain Plat Map, it shows Joseph and Ellen Tolfree and their family were living in Section 3 of Lakefield Township on 40 acres of land on Roosevelt Road between Merrill and Fenmore Roads. Their children went to the Byrnes School which was located on the corner of Swan Creek and Fenmore Roads. In 1896, their neighbors were: George Rigg, F.H. Cooper, John Barns, Louis Baker, George Trudgen, John Baker, William Sandhoff, Edward Miller, H.M. Schmidt and Joseph's mother and step-father, William and Emma Button, who lived on the corner of Merrill and Roosevelt Roads.

By 1916, Joe sold his property on Roosevelt Road to the Welke's and bought two additional 40 acres of land. The two 40 acres of land were on Merrill Road between Nelson and Grabowksi Roads, one in Section 27 and the other across the road in Section 26. When living on Merrill Road, Joe and Ellen's children went to the Brown School which was located on the corner of Grabowski and Fenmore Roads.

According to the Book “Lest We Forget”, page 84, by Myron F. Gulick; “ Joe Tolfree and his wife had a farm on what is now called Merrill Road, Section 27, Lakefield Township. Joe made cement blocks and tile; he also had a well drilling machine. One day he got caught in a moving part and was injured quite badly. He recovered, but didn't drill many wells after his accident. The school teachers boarded at the Tolfree home and sometimes Joe had a lot of fun with them. Joe liked to joke and kid around. Joe grew beets on his farm, they were hand thinned, hoed and harvested. The Belgians did most of the hand work."