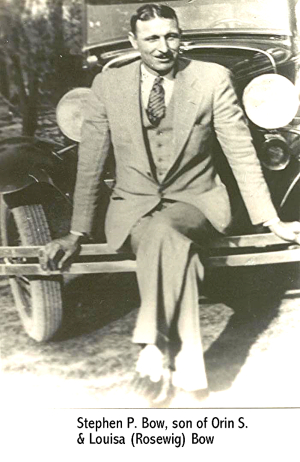 Stephen Philip Bow was born September 17, 1900 in Lakefield Township, Michigan, the third son born to Orin and Louisa (Rosewig) Bow. He was about nine years old when his mother, Louisa (Rosewig) Bow, passed away. He spent some time living with the Bublitz and the Glinke families after his mother died.

When an adult, he would come home to Lakefield Township on the week-ends and go to Merrill on Saturday evenings spending time just walking around town and visiting with people. The town was heavily populated at that time and the local citizens patronized the businesses there and he knew most of the people, including the Lakefield Township people. He worked for several years at the Winkler-Lucas Ice Company and then the Chevrolet Transmission Plant in Saginaw, Michigan.