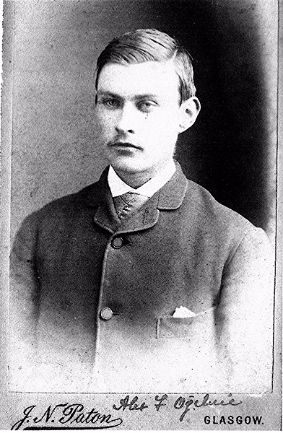 Alexander F. Ogilivie was born 17 May 1837 in Carnoustie, Scotland. He was married to Margaret Galloway on 18 February 1859 in Chatham, Kent, Ontario. Margaret Galloway was born 7/8 July 1841/1842 in Colburg, Canada. Alex and Margaret lived in the City of Saginaw in 1880 on Throop Street.

Alexander and Margaret's children were:

Margaret died on 12 April 1883 in the City of Saginaw, Saginaw County, Michigan. Alexander then married Esther Jane Hancock. Esther was born 4 April 1839 in New York; her parents were Isaac and Margaret VanCleaf Hancock.. Alexander was a Foreman for the Tittabawassee Boom Company.

Alexander and his family moved to Lakefield Township where he owned and operated an 80 acre farm in Section 15 on the SW corner of Lakefield and Fenmore Roads.

On 1 April 1895, Alexander was elected to the Lakefield Township Overseer of Highway Road District #3.

Alexander was also appointed as Chairman, Board of Elections on 6 April 1896 of Lakefield Township.

Alex Ogilivie was appointed by  Michigan Secretary of State Warner to be a Census Taker for Lakefield Township.  The Saginaw News Article was published on Monday, May 2, 1904, and stated Alex Ogilvie's as an appointee.