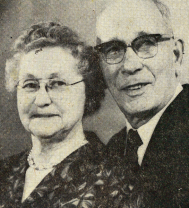 John and Rose had the following children:

John was engaged in farming all of his life. In 1920, John and Rose lived on a 156 acre farm in Section 28 on the corner of Meridian and Nelson Roads. By 1940, John and his family are living in Merrill, Jonesfield Township, Saginaw County, Michigan and his Uncle Frank H. Tester is living with them.   John was an outdoorsman; hunted deer, pheasant and enjoyed fishing.