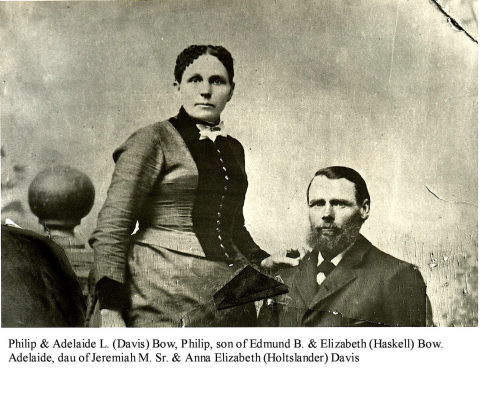 Philip was born January 16, 1831/3 in Maine and his parents were Edmund B. and Elizabeth (Haskell) Bow. Philip's father, Edmund, served in the War of 1812. Edmund and his family moved to Saginaw around 1836 where he owned and operated a tavern/inn in one of the old buildings of Fort Saginaw. Phillip married Adelaide Louise (Davis) Bow on February 1, 1856 in Zilwaukee, Michigan. Adelaide was born July 31, 1840 to Jeremiah and Anna Elizabeth Holtslander Davis. “All of the Bow descendents living in the Saginaw area are descended from Edmund”, according to grandson, Bill Bow. Adelaide owned and operated a farm in Section 21 on Nelson Road with her sons, Stephen, Charles and Orin Bow (Orin built a home there later on.) Adelaide purchased the farm in 1893 after Philip passed in 1892. Adelaide's neighbors were Rudolph Hinterman and Peter Rosewig.

Philip and Adelaide's children and spouses were: