In 1880, John and his family are living in Lakefield Township. 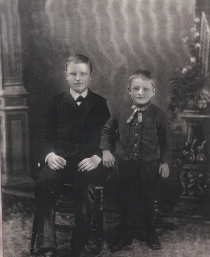 John and Minerva's children were: