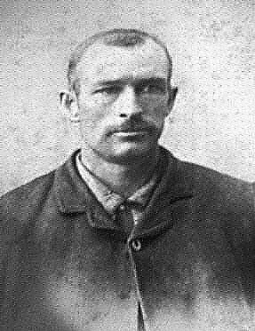 The 1880 Agricultural Michigan Census states that John owned 15 acres of tilled land, five (5) of which was meadow and permanent pasture or orchards with 25 acres of woodland or forest in Lakefield Township.

John and Isabel had the following children:

Isabel Spurbeck Baker died on December 11, 1883 due to complications during child birth and is buried in Lakefield Township Cemetery. 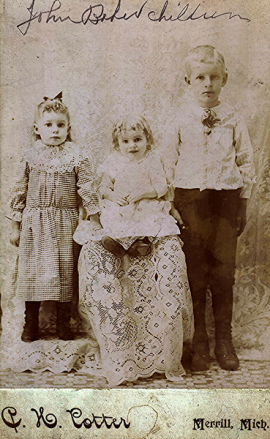 The photo is of John and Rose Baker's children - L to R - Evelyn, Lottie and Bernard Baker

John married for the second time to Rose Schomers on October 23, 1884 in Merrill, Jonesfield Township, Saginaw County, Michigan. Rose was born May 18, 1870/71 in New York to Mathis and Catherine Wock Schomers.

John and Rose had the following children:

1. Bernard Hiram Baker was born May 8, 1887 in Lakefield Township and was married to Marguerette Hodges and then to Martha Bethke Neirsel.

John was elected to many Lakefield Township offices and they are as follows:

In 1916, John and Rose owned an 80 acre farm in Section 27 on Grabowski Road between Merrill and Fenmore Roads. John was known for driving a team of three horses and he customized his farm equipment for that purpose. He was also a very good carpenter and bear hunter.