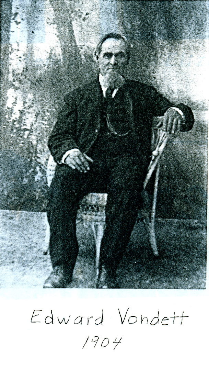 Edward Vondett was born April 29/May 28, 1832 in Canada/New York State. His parents were Victor and Lucy Vondett. He was an only child and a sailor of the Great Lakes. He married Mary Derosia in New York. Mary was the daughter of Levi and Catherine Derosia of Clayton, Jefferson County, New York.

Edward and Mary had the following child:

Mary died at John Henry's birth; Edward gave the infant to Mary's childless sister, Sophia Garrow, who raised him as her own. Edward went back to sailing the Lakes and according to stories told by John Henry, never returned.

Edward married someone named “Elizabeth” on April 20, 1863 in Clayton Township, Jefferson County, New York and by 1880, Edward and Elizabeth Vondett are living in Lakefield Township.

John Henry located his father, Edward,  in 1890 living in Lakefield Township on an 80 acre farm in Section 2 on the NE corner of Merrill and Swan Creek Roads. John Henry brought his wife, Elizabeth Jarbeau Vondette and their four small children to Lakefield Township and lived near Edward, for about eight years before moving to Central Lake, Atrium County, Michigan.

Edward was elected Overseer of Highways Road District #6 on April 6, 1891

Edward divorced Elizabeth on March 14, 1904 in Saginaw, Saginaw County, Michigan. He put his Lakefield farm up for sale and soon purchased 120 acres of land in Albert Township, Montmorency County, Michigan and lived near his son, John Henry and his family.