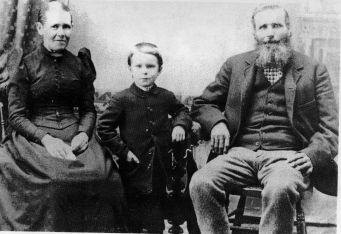 THE PHOTO IS HENRY AND EMILY WITH THEIR GRANDSON, GEORGE

Henry "William" Tester (nickname Harry) was born April 15, 1818 in London, England to the parents of John and  Fanny Croace Tester Henry married Emily Rebecca Bristow near London, they were married on May 21, 1839 at Plaxtol, Kent, England.  Emily was born September 22, 1819 and was baptized 5 December 1819 at Tonbridge, Kent, England.  Emily's parents were Thomas and  Ann Bristow. The Tester's were a wine making family in England.

Henry, Emily and their infant daughter, Emily arrived  at a New York, New York port on June 16, 1842 from a port in London, England. The ship they traveled on was named Hendrik Hudson.

Henry and his family,  when moving to Canada settled in Point Pelee, Ontario near Leamington (Mersea Township), Essex County, Ontario, Canada.  They also lived in Walsingham Township, Norfolk County, Ontario, Canada.  Henry eventually purchased each of his sons, Thomas, Charles, William and George a forty acrre tract of land in the United States near Saginaw, Michigan in Lakefield Township.

Henry and Emily's children were: