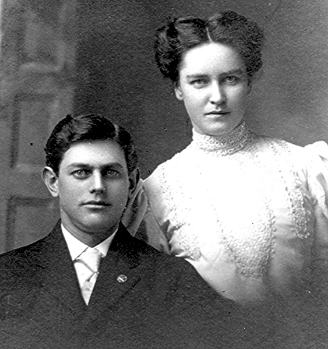 The photo is of O.B. and Lorena Parker

O.B. And Lorena's children were:

Lorena passed away on July 27, 1920 of scarlet fever; seven days after giving birth to their youngest son, William Kingsley. O.B. Passed away three years later on May 6, 1923 from valvular disease of the heart. O.B. And Lorena's two children Arthur and Thelma were raised by Lorena's sister and brother-in-law, Simon and May Murphy. Their oldest son, Elmer Parker invented a washing machine, patented his product and became a millionaire.

O.B. And Lorena are both buried in the Lakefield Township Cemetery.