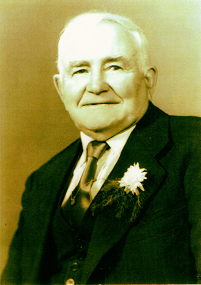 Frank Mason was born on November 20, 1871 in Branch County, Michigan; his parents were Tyler and Marion Baxter Mason. Frank married Margaret E. Cole on January 30, 1914 in Saginaw, Saginaw County, Michigan by A. Clements, Justice of the Peace. Margaret was born in 1888; her parents were Abner and Elizabeth Fauste Cole.

In the 1900 Lakefield Township Census, Frank's parents, Tyler and Marion, are living with him.

By 1916, Frank and Margaret own another 40 acres in Section 34 of the west side on Merrill Road between Grabowski and Colvin Roads.  By 1920, they owned 120 acres in Section 34.   Their neighbors were:  John Gath, George Stadler, George Clay, Frank Glinke Jr. and Ludwick Mayer, William Geiger, and Joseph Tolfree.

According to the book “Lest We Forget” written by Myron Gulick, Frank and Margaret helped raise his nephews, Milan and Charles T.  Mason.

Margaret passed away in 1948 and Frank in 1954. They are both buried in the Lakefield Township Cemetery. 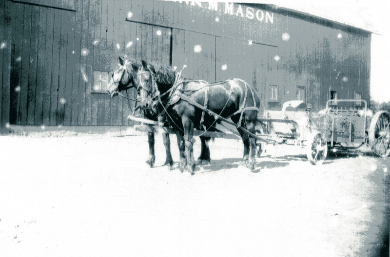 Frank Mason with his two automobiles beside his barn.