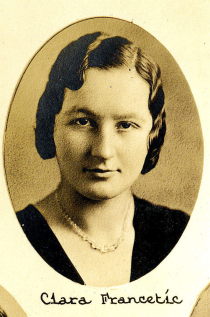 Louis Francetic was born in Yugoslavia on June 4, 1868; his parents were Phonias and Agnes Prelec or Pralor Francetic. He married Antonia Katanac on January 6, 1892 in Yugoslavia. Antonia was born December 28, 1872; her parents were Paul and Margareta Kushtic Katanec. Louis came to the United States from Suenedjelya, Yugoslavia in 1907, when his son Tony was 14 years old. They resided in Chicago, Illinois a short time before moving to Lakefield Township in 1907.

By 1916, Louis and Antonia owned and operated two parcels of land in Section 4 in Lakefield Township. They owned 76 acres on Ederer Road between Fenmore and Meridian Roads and 40 acres of land on Fenmore Road between Ederer and Swan Creek; both properties adjoined in the middle of the mile. Their total property was 116 acres. Their neighbors were A. McDonald, Herbert J. Wilson, M.C. Ross, E.J. Frost, and Joseph Suber.

Louis and Antonia's children attended the Byrne's School, located on the SW corner of Swan Creek and Fenmore Roads. Louis and Antonia belonged to the Merrill Sacred Heart Church.

Louis and Antonia's children were:

Louis passed away June 3, 1942 and Antonia passed away on May 28, 1958. They are both buried in the Sacred Heart Cemetery in Lakefield Township.